As some of you will know, I attended Summer in the City this year and absolutely adored it. The experience was one that will stay with me for years and while we (my boyfriend and I) were there we hastily booked tickets for 2018. Naturally, this meant that when the brand new Youtube convention that is Hello World was announced we jumped at the chance – especially as most of the guests don’t often attend events! The experience, however, was somewhat different.

I want to start by saying that I only attended the show as opposed to the whole day and this is just my personal experiences. I don’t want to dwell or draw on others’ experiences as it’s difficult to validate them and I think an assortment of opinions helps give others a wider picture.

Upon arrival we were met by an astronomical queue which I must admit was daunting but security assisted those less able and once doors opened it moved swiftly with a lot of direction by the marshalls which was great! However, there were a few people who didn’t get into the venue until after the show had started so I feel for future performances opening the doors earlier would’ve been a good shout but as this was the first day it was just something to be expected and be ironed out.
Now to the important bit – the show. There wasn’t much information online besides different sources saying it was a 4-hour life show (which brought confusion as to whether that was just the show or the whole event) and another saying it would be 2 hours. The show itself was only 1.5 hours and I must admit I was disappointed. I felt that the £30 ticket cost was perfectly reasonable but it would’ve been nice to see all the creators.

The performances were very unique ranging from games to speeches to live music and I found that I either loved or hated them. As a 21-year-old there were various moments were the humour and performances themselves were just entirely aimed at a younger audience. Now I am aware that most of the creators do have a younger audience but I felt that it really was too child-like and it was almost difficult to watch. However, I thoroughly enjoyed Louise’s performances and how Rose and Rosie stayed true to themselves despite a child-like show. We also didn’t get to see a lot of the creators which was a real shame.

I know this is a very short overview but I have to admit I both love and hated the experience. I hope this gives a bit more of an insight especially to those of us who are not the stereotypical audience type. 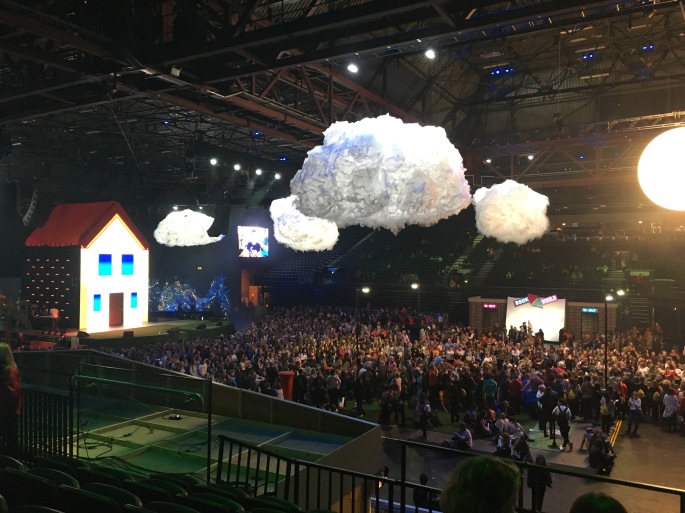