It’s currently 1:18 and I can’t sleep. I’m laying in my bed in my house in Brighton with Erin next to me and Katie and Sarah asleep upstairs. Tomorrow we celebrate Pride. And I can NOT wait! The excitement is so real. Last year was my first ever Pride and it was the most magical day so I expect nothing less of tomorrow, especially from the gay capital. that is Brighton We’ve decided to head into town for the parade and then we have tickets for the aftershow in Preston Park with Britney fricking Spears (along with Pixie Lott, Ella Eyre and so many more). Erin and I have decided we’ll wing our evening plans based on how we’re feeling but we just know it’s going to be a wonderful day. I identify as bisexual if you didn’t already know. It’s something I don’t talk about often but something I rate highly within what identifies me as a person and I love having this day to celebrate that part of myself along with the wonderful LGBTQ+ community. Don’t get me wrong, there are flaws among the community, issues still to be tackled but as far as I’m concerned that’s for the other 364 days of the year (maybe 363 as I think we might need Sunday to recover!). Anyway, I really must sleep but I plan on taking a million and one photos which I’m sure I’ll share beneath this along with an overview of what we did and just how good it was!

Now we’re a little while on and it’s time to write all about it. Pride was amazing. Truly. I absolutely adored it. We (myself, Erin, Katie & her friend Sarah) got up fairly early and headed to town to find a spot to watch the parade. We were quite early so we decided to head to a pub for a few drinks (non-alcoholic for me of course) and get into the spirit before the parade reached us. As with last year, we successfully found a bus stop which was just divine as it provided a bit of shade – the UK’s weird heat wave was still occurring) – and a place to sit down. It was a beautiful parade and once again the atmosphere was incredible. There were so many floats and it was so welcoming to see even more diversity than at last years parade – way more non-binary, trans and bisexual flags were being waved and it was so beautiful. As usual, my favourites were the floats playing absolute bangers to bop along to but I can’t deny I did well up at some of the signs being shown. It was also so heartwarming to see my university, Sussex, marching along with their own members and I won’t deny it made me a bit tearful – Sussex has a few faults but in some respects, I couldn’t adore them more – more about that in a future post. We were near the end which unfortunately meant the organisation was a little lacking so there were occasions everybody believed the parade was over but it, in fact, was not! It wasn’t that much of an issue however and actually meant we ended up walking in it for a while which was quite amusing. 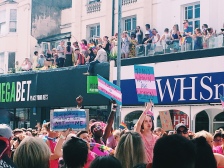 It was finally time to head to Preston Park for the Festival. As we were so close it was an easy walk but the queues there were insanely long and I was a bit disheartened as the accommodations for disabled/chronically ill weren’t well signposted resulting in me in agony having not known I could fast track. Thankfully I had all my medication with me and my gorgeous friends agreed we could find a spot for food and a rest once we got in which was so welcomed. We had noodles – a festival staple and which couldn’t taste that good any other time or place – and it took me back to my times at V fest and Sundown – something I’d love to do again but likely couldn’t manage (at least I have such happy memories though). 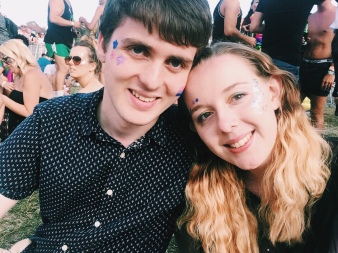 There were a few rides and stages dotted around but it quickly became clear we all had the intention to go to the main stage, chill out and listen to the music and make sure we had a solid spot for Britney. We were super fortunate to get into the front pen right by the stage where we listened to a few artists including Ella Eyre & Pixie Lott. It was a chilled and happy time and we sung along and even grabbed an ice cream. Then it was time for Britney. It was getting busier and busier which meant we all had to stand (but we’d assumed that and I’d rested to prepare myself) until our pen was shut off and full. Britney was incredible. She sang the absolute classics and we all sung and danced and I got a little nostalgic remembering in Primary School where my friends and I had made a rendition of one of her songs as an initiation for our ‘girly gang’. Honestly, we couldn’t be happier but also completely ready for bed by the time it had ended. Erin & I were feeling especially thankful we hadn’t spent money on club tickets as there’s no way we could manage that too. 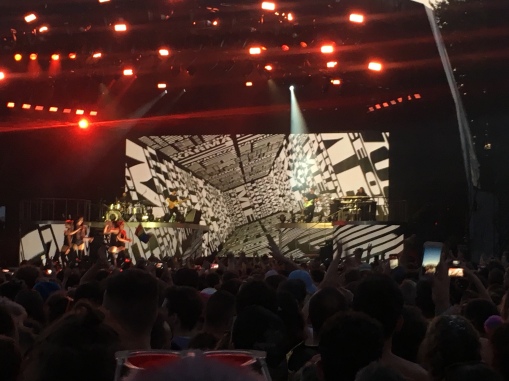 Here I’m going to be honest – it turned into a shit show. There was pushing and shoving to a make-shift entrance they’d made to reach a new path in which we were instructed to leave via. We’d hoped to get a bus or a taxi given my inability to walk far and the length of the day but we decided we’d follow instructions and wait till we got to somewhere familiar to grab a lift. Then it got worse. I was in agony by this point and we came to multiple not-working turnstiles all solidified into the ground blocking the exit – people were being instructed to climb over. Of course, I can’t do that so I had to try and attract the attention of someone (to no luck) – thankfully Sarah helped and they gave me the smallest area to climb through but it still subluxated my hip. It was total crap and a few of us who’d been affected contacted the organisers to ensure it’s better next year (fingers crossed). We also ended up having to walk home due to no buses running and our location and how busy it was and I slept for most of the three days after.

However, despite those negativities, it was a day I’ll look back on fondly. I adore Pride and how it just makes me feel so giddy and happy and truly myself and I’m so glad I got to enjoy it in Brighton with some of my favourite people in the world.