Bring on the New Year and lots of new products to love – without further ado here are my loves for January 20-and feckin-18.

Let’s start off with a Lush product because I think we all know I just can not get enough of them – Hot Toddy shower gel. This product was released as ‘exclusives’ for Christmas 2017; these products are old Christmas range products which have now been removed from the permanent Christmas line. Although I’ve tried a lot of the old products this shower gel was not one I’d heard of – I actually thought it was an American only release – so when I saw it on my page I just had to get it and boy is it good! It’s a stunning red with buttloads of glitter thrown in, essentially the epitome of Christmas. The scent, however, is one that divides people quite like marmite, with the most prominent scent being cinnamon. It’s also paired with citrus oils making it softer and painting a picture of a cosy night. In terms of formulation, it lathers so well and honestly, I just can not fault this product. I’m so mad I only have one bottle so I’m going to have to cherish it.

If you’re at all into Lush’s products I’m sure you’ll have heard of Sleepy body lotion (which I do rave about) but there is so little hype for the Comforter body lotion. It smells just like the incredible bubble bar, mainly of blackcurrant and cypress – it smells so good you could eat it! It is so nourishing and despite having eczema it doesn’t irritate my skin at all but instead softens, nourishes and cools while making me smell insane. It’s pink too which I just adore – Lush you’ve done good!

Sticking with the Lush products because I barely use any other products brings us to the Thundersnow bath bomb, an exclusive from the 2017 Christmas range – initially released at the 2017 Summit. Firstly just look at the pictures below! – how heavenly and absolutely divine does that look, I am in love. The first time I used this I was impressed but not totally head over heels but after using it a couple more times I just wanted to own hundreds. It’s described as being ‘a storm of peppermint and cocoa’ and that could not be more accurate. It is so calming and perfect for a before-bed treat. The scent, however, doesn’t linger on the skin which is a slight disappointment but I personally think the gorgeous visual art it creates makes up for it.

And the last Lush product for this favourite post is the Jingle Spells bath bomb. Again this was a new one for me and which I purchased along with Hot Toddy. The bath bomb is a gorgeous purple colour and smells like mulled wine which is just incredible! The bath bomb contains four essential oils (juniperberry, tangerine, fennel and ylang ylang) which not only adds to the smells but it makes it nourishing for the skin and softens it so well. The scent also lingers on the skin which is awesome.

As it’s winter my skin has been really struggling and is so dry and sad but simple skin quench sleeping cream *  has been helping me out! It’s light enough on the skin that it doesn’t feel weighty and sticky and gross when I sleep but it sinks into the skin well and I wake up with much better skin. I definitely recommend it if you’re looking for something to help in this cold weather!

And lastly, I’ve got a hand soap: Baylis & Harding – midnight fig & pomegranate hand wash*. It smells like Christmas allowing me to hold onto the festivity for a little bit longer. There’s not all that much to say except I 100% love it and I hope it’s brought around again next year.

This month was a bigger one for me in terms of new films and television shows, I’m going to kick it off with The Greatest Showman*. This film is just wild and so emotive from start to finish. I’ve always been a musical fan but for a film and its songs to stick in my head for so long is huge – I’m hoping to drag my boyfriend to watch it with me again ASAP. I really think everyone could get something out of this and enjoy it.

Next up was Pitch Perfect 3* and man oh man do I love a bit of Anna Kendrick. Even if these fils weren’t incredible themselves I’d watch them purely because they re-confirm my bisexuality every single time. But I also really enjoyed this plot and the music and it was an afternoon well spent.

Star Wars hasn’t always been a series I adored but Rogue One dragged me in and The Last Jedi* was insane! I honestly don’t have many words except GO SEE IT & also girl power rocks.

And last but not least is a series I’ve started watching which is Once Upon A Time*. Everyone always told me I’d love it but I struggled to get into it until now. It’s just so fun and gripping and I love the incorporation and flow of the plot and the characters.

Although I’ve read a large number of books this month not many of them were favourites which makes these two featured even more special.

First of all is Turtles all the way down by John Green*. I’ve always loved Green’s books but this started a little slow so I was worried it wasn’t going to be good but thankfully it picked up. The novel is very touching and open but the aspects involving Mental Health are handles so well and the plot thickens and twists and turns allowing it be less predictive and more intricate. I would go as far as to say this is my favourite novel by Green so far and I’m trying all my friends to read it. 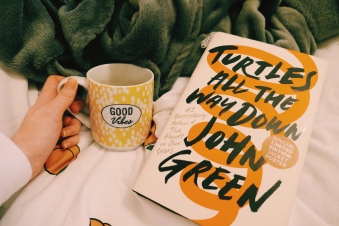 Secondly is not a novel but a poetry anthology by Sabrina Benaim: Depression & Other magic tricks*. This again is mental health based but is written, for the most part, with hope and throughout with absolute heartbreaking honesty. It’s truly renewed my love of poetry and I’m so excited to indulge in more throughout the year. 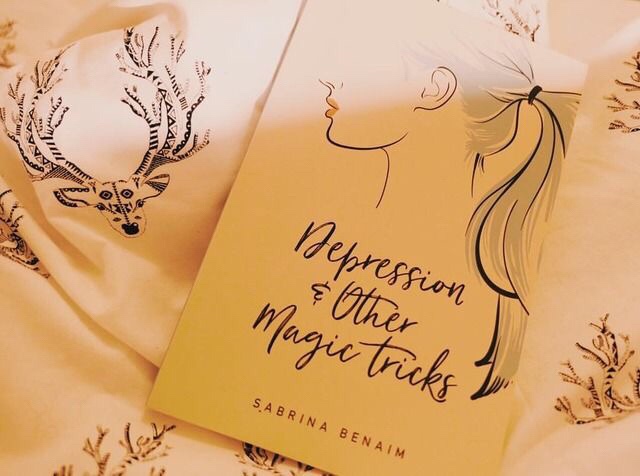 Just a little note to watch triggers with both of these: Depression, OCD, anxiety, suicide etc. If you want any more information please feel free to drop me a message!

My ‘other’ category is a little sparse as I’ve been almost exclusively stuck in my bedroom throughout this month due to exams however I did want to mention a magazine I’ve been enjoying. Happinez magazine is all about what is says: happiness and to some degree health. It’s perfect for some morning motivation or to just put a smile on your face and I personally feel it’s quite good value for money. I haven’t got a subscription and as a poor student I can afford all the copies but when I can I tend to read them slowly to savour them. I have about 12 magazines sat on my desk at the moment that I’ve collected or been sent over the last few months of all different genres so I’m hoping I’ll find others too.

January tends to bring around the ‘new year, new me’ resolutions which I wholeheartedly agree with – a post I think will be on its way soon – however I despise that its so often ruled by diet culture with peoples goals to get a ‘Summer Body’. Newsflash: If your body exists in summer its a summer body regardless of size! Of course along with this my eating disorder fuels off it so I was so glad to see the existence of Self Love Bootcamp. Kenzie (omgkenzieee on Instagram) started a workshop alongside a facebook group to work on loving yourself and I adore it. I think everyone should make it their resolution. It’s never too late to join so please feel free to click on her Instagram and join along with us!